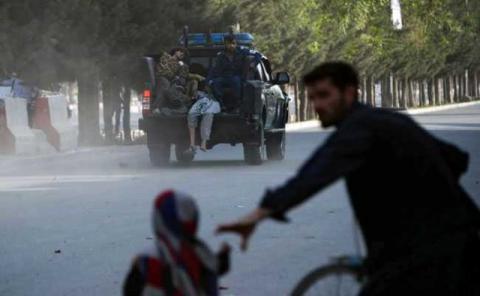 Senior government officials, political leaders and supporters were leaving the airport after greeting the powerful ethnic Uzbek leader and former warlord when the explosion happened.

"This is the first time I have seen a suicide attack," one witness told AFP.

"People were collecting human flesh with their hands," he said, shaking as he spoke. "What is going on in Afghanistan?"

Dostum, clad in a Western suit and sunglasses and travelling in an armoured vehicle, was unharmed, said his spokesman Bashir Ahmad Tayanj.

Kabul Police spokesman Hashmat Stanikzai said 14 people had been killed and 60 wounded, adding that nine members of the security forces and traffic police were among the dead.

The suicide bomber was on foot, interior ministry spokesman Najib Danish said, adding that civilians, including a child, and security force members were among the casualties.

Dostum, who is linked to a catalogue of human rights abuses in Afghanistan, was mobbed like a celebrity as he left the chartered plane from Turkey, where he has lived since May 2017.

His return, which has been the subject of much speculation, comes amid violent protests in several provinces across northern Afghanistan, his traditional power base.

Thousands of Dostum's supporters have taken to the streets in recent weeks, shuttering election and government offices and blocking sections of highways to demand the release of a pro-government militia leader and call for Dostum's return.

Expectations of the return did little...