At Least 14 People Shot in Toronto and Shooter is Dead 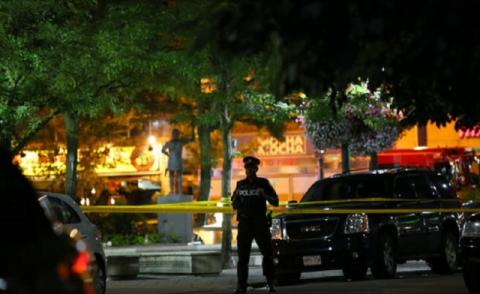 (CNN)A woman was killed and 13 others injured in a shooting in Toronto on Sunday night, Police Chief Mark Saunders said.

The suspect is also dead, Saunders said. The shooting victims are being treated for their injuries and their conditions were not immediately known. But one of the victims -- a young girl -- is in critical condition, Saunders told reporters late Sunday. Shots rang out shortly after 10 p.m. ET in the Toronto's Greektown neighborhood. It's not clear what motivated the shooter, police said. They're investigating "every possible motive, including terrorism," Saunders said.Toronto Mayor John Tory urged people not to draw any conclusions and let police investigate the shooting. The shooter, who had a handgun, died from an apparent gunshot wound, but it's not clear if it was self-inflicted or as a result of exchanging gunfire with police, Saunders told reporters. A witness who was standing near the scene told CNN partner CTV that he heard about 20 shots and the sound of the weapon being reloaded repeatedly.