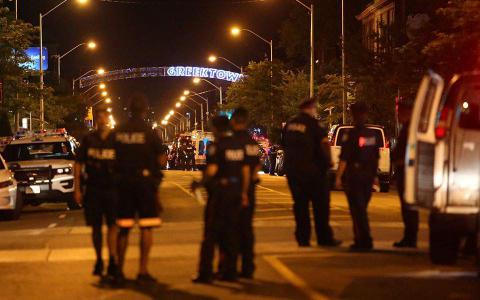 A man firing a handgun into restaurants and cafes as he walked along a Toronto street shot 14 people, killing one of them, before dying after an exchange of gunfire with police late Sunday, police said.

Police Chief Mark Saunders said the shooting in the city's Greektown neighborhood was not random and he did not rule out terrorism as a motive.

"Other than the shooter we have a young lady that is deceased," the police chief said.

Saunders also said a 9-year-old was in critical condition.

A video from one witness shows a man dressed in black clothes and a black hat walking quickly and firing three shots from the sidewalk into at least one shop or restaurant. Toronto's Greektown is a lively residential area with crowded Greek restaurants and cafes.

The condition of the other victims was not known yet, police spokesman Mark Pugash said.