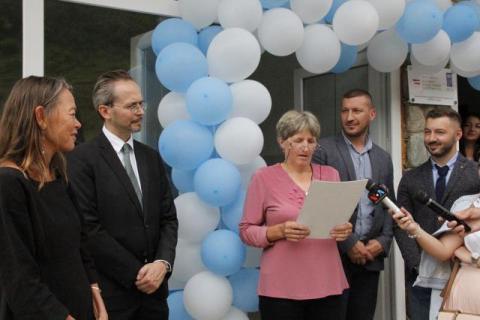 Municipality of Shterpce/Strpce, ADA and UNDP continue to create employment opportunities for women in rural areas through social entrepreneurship

Local women gathered to participate in the official opening of the first all-women social enterprise in the village of Sevce, Shterpce/Strpce Municipality. All of them are first time employed and very proud of their achievement.

The event was organized by the municipality of Shterpce/Strpce, Austrian Development Agency, and UNDP ceremonially opening the Social Enterprise "Nezavisno Udruenje Zena Sevce".

Ambassador Pfandler on this occasion said: "Today's event is a proof of strong partnership with municipality and UNDP. We know statistics on unemployment and we know it targets women especially. Through INTERDEV we are working here since 2004 and for four and a half years we helped many vulnerable groups. Engagement of vulnerable communities, women and people who are at risk of being left behind in development processes is one of the priorities of the Austrian government and Austrian Development Agencies".

Established in 2016, the association of 40 women focuses on processing of different cultivated fruits as well as aromatic herbs and teas. Amongst other products, they also produce fruit juices, sweets, jam and honey. Through the grant and advisory support provided by the project, the association will expand its operational capacities and support job creation and income generation for the vulnerable women in the municipality, merging economic and social objectives.