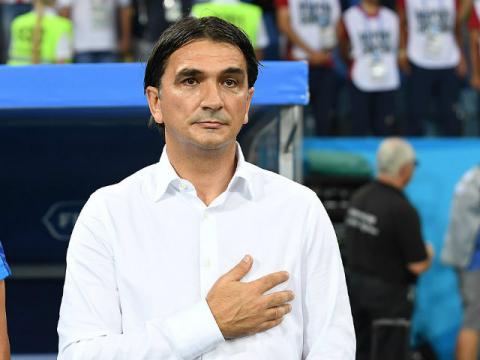 Thousands of people feted the coach of soccer World Cup finalists Croatia, Zlatko Dalic, in his hometown of Livno in Bosnia and Herzegovina on Tuesday, as celebrations of the team's feats in Russia continue.

That same day, Dalic was shortlisted for the Best FIFA Men's Coach award, and superstar midfielder Luka Modric was nominated as FIFA's Player of the Year.

According to local authorities' estimates, between 50,000 and 60,000 people filled the town's modest stadium on Tuesday to welcome Dalic.

"I'm also one of you and I'll never forget where I was and from where I started. I know how much emotions you gave to the Croatian national team. We are not world champions, but you know that the team gave their best," Dalic told to the crowd.

Croatia lost 4-2 to France in the World Cup final on July 15 in Moscow.

The team's performance in Russia sparked scenes of wild celebration among some in Croatia and soul-searching among others over the state of Croatian soccer, bedevilled by corruption, mismanagement and political interference.

Nationalist Croatian singer Marko Perkovic 'Thompson' was among the stars who entertained the crowd in Livno.

Thompson's starring role in the celebrations since the final, including a place in the team bus, has caused controversy given his association with hard-line Croatian nationalism and the anti-Serb sentiment frequently voiced by his fans.

Thompson, who has sung for indicted war crimes suspects, performed at another party for Dalic last week in the Croatian town of Varazdin, where the coach spent part of his career.

Asked then about the singer's presence by regional broadcaster TV N1, Dalic retorted:

"Croatia is the second in the world, and you ask me about singers? Don't...