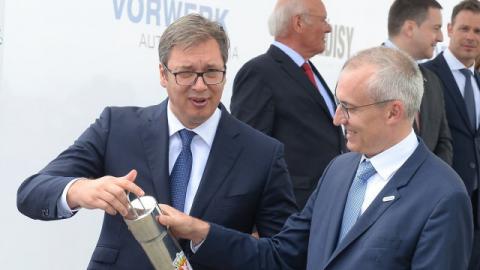 Serbian President Aleksandar Vucic has warned that unless the issue of Kosovo and Metohija is solved, "in 20 years we will lose everything."

"You don't want a delimitation with Albanians? No problem, tell people to get ready to defend Vranje (a town in the southern part of central Serbia) in 40 years's time. Don't you think that our people are leaving even today? In the address that I will make, I will present all the data," Vucic said on Friday.

This was his reply when reporters asked about an open letter sent by the Serbian Orthodox bishop of Raska and Prizren, Teodosije, who warned that "a partition of territories" would lead to the expulsion of Serbs from the southern province, i.e., Kosovo and Metohija, and put the Serb cultural heritage there in danger.

Vucic noted that "the best answer to that is already contained in a journalistic question" - namely the one that asked "isn't what Bishop Teodosije is warning about already happening today." Vucic added that "world powers and foreign services have the same argument as to why they don't want ethnic borders."

"Something, surely, is better than nothing," the president said.

He accused "many others, especially his political opponents" of in reality wanting no solution for Kosovo.

"They want to be safer today, and tomorrow? What do they care...," Vucic went on.

"The essence," according to the president, is in his opponents seeing the issue of Kosovo as "the best ground on which to bring down his rule."

Vucic also said he would go public with a proposal for a solution - "if I can reach agreement with someone on something, since it has not been possible to reach it with Albanians."

"I will not answer in detail and thoroughly yet, but I will answer everyone in Serbia and around the world. I will unambiguously say which world powers and foreign services have the same...