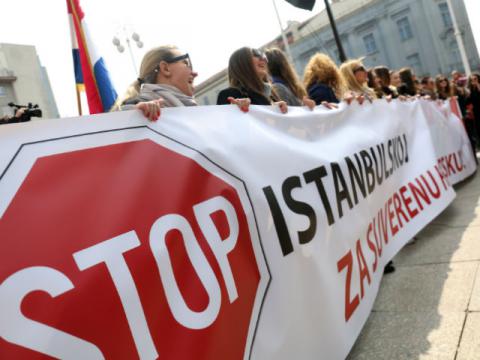 The Bulgarian Constitutional Court on Friday ruled that the Council of Europe's convention on preventing and combating violence against women and domestic violence, known as the Istanbul Convention, does not conform to the Bulgarian constitution.

The 12-member court ruled by eight to four that the convention's definition of "gender" as a social construct "relativizes the borderline between the two sexes - male and female as biologically determined".

It added that if society loses its capacity to distinguish between a man and a woman, the fight against violence against women would become a formal and unfeasible commitment.

The ruling stipulates that "the lack of a common understanding of the concept of gender is illustrated by the active social and political discussion 'for' and 'against' the gender ideology that has been ongoing in dozens of countries around the world for two decades".

The ruling comes after 75 members of parliament, mostly from the ruling GERB party, asked the court for an opinion about the constitutionality of the convention, after MPs refrained from ratifying it in the beginning of this year.

The Istanbul Convention was approved by the Bulgarian government in January 2018, but the plan to pass it for ratification in parliament stumbled following criticism, especially from one of the parties of the United Patriots Coalition, VMRO.

On December 28, the party, led by the Minister of Defence, Krasimir Karakachanov, claimed that,...