FYROM sets Sept. 30 for referendum on name deal with Greece 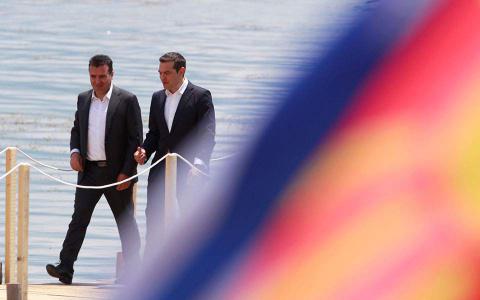 The parliament of the Former Yugoslav Republic of Macedonia (FYROM) on Monday set Sept. 30 as the date for a referendum on NATO and EU membership bids and on its agreement with Greece on the country's name.

Sixty-eight deputies in the 120-seat parliament voted in favor of holding a referendum on the question: "Are you in favor of NATO and EU membership, and accepting the name agreement between the republic of Macedonia and Greece?"

The opposition nationalist VMRO-DPMNE deputies were not present at the session.

In June, NATO sent an invitation to FYROM to begin accession talks with the alliance, following a landmark accord with Greece over the former Yugoslav republic's name.

Greece refused to accept the country's name, saying it implied territorial claims on the Greek province of Macedonia and amounted to an appropriation of its ancient...