Spain Rescues over 200 Migrants from 21 Boats off Gibraltar 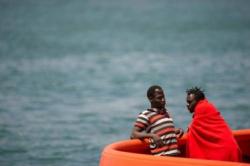 MADRID - Spain said it had plucked more than 200 migrants from the Mediterranean Sea on Sunday as the country's interior minister headed to Mauritania to try to boost cooperation in the fight against illegal immigration.

Spain's maritime rescue service saved 211 migrants from 21 different boats in the Strait of Gibraltar, which separates Spain from Morocco, a spokesman for the service said. They will be taken to the port of Algeciras in southwestern Spain, he added

The latest arrivals come after the rescue service picked up more than 1,200 people attempting the perilous crossing from Morocco to Spain, which has now surpassed Italy as the number one destination for migrants crossing the Mediterranean by boat.

Interior Minister Fernando Grande-Marlaska will meet on Monday with his Mauritanian counterpart in Nouakchott, the capital of the West African country, to "strengthen cooperation in migration matters and the fight against terrorism," Spain's interior ministry said in a statement.

During a fact-finding visit to Algeciras on Saturday to learn how police and the Red Cross were coping with the influx of migrants, Grande-Marlaska said it was "a European problem which requires a European solution."

The minister said the government was working against the clock to open "a center" in the port of Andalusia with room for 600 people.

As a crackdown by Libyan authorities has made it more difficult for migrants to reach Italy, many are attempting the trip from Algeria and Morocco into Spain.

More than 19,580 people have landed on Spanish shores so far this year, according to the International Organization for Migration.