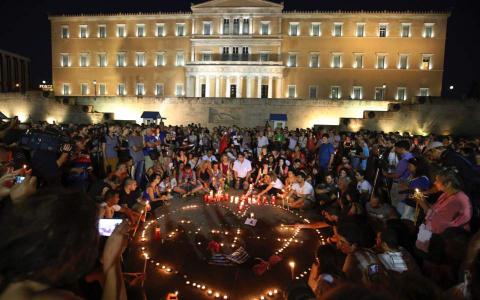 Hundreds of people gathered on Syntagma square in Athens on Monday night to commemorate the victims of the devastating blaze in the east coast of Attica that killed 91 people and injured scores exactly a week ago.

The rally had been organized on social media and people started gathering at 9 p.m.

Attendants placed candles, flowers and messages on the square in front of the Greek Parliament. The date of July 23 was marked with candles.

Fanned by high winds, the blaze gutted seaside resorts where many Athens residents and retirees have holiday homes.

Early in the morning, Prime Minister Alexis Tsipras made an unannounced visit to Mati, to speak with engineers and rescue workers.

In a tweet, Tsipras expressed his "indescribable grief" and "immense respect" for those...