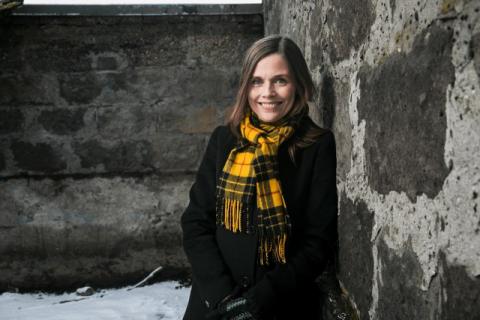 "MY POLITICAL GOALS WILL ALWAYS BE LINKED TO THE ENVIRONMENT, SOCIAL JUSTICE AND GENDER EQUALITY!"

Katrín Jakobsdóttir has been Prime Minister of Iceland since November 2017. At 42, she is the youngest female head of government in Europe, leading the Icelandic Jamaica coalition. Jakobsdóttir is married and has three sons. Sven Lilienström, founder of Faces of Democracy, spoke with Katrín Jakobsdóttir about democracy, gender equality and climate change.

MRS. PRIME MINISTER, THE FACES OF DEMOCRACY INITIATIVE WANTS TO SUPPORT A BETTER UNDERSTANDING OF DEMOCRACY AROUND THE WORLD. HOW SIGNIFICANT ARE DEMOCRACY AND DEMOCRATIC VALUES TO YOU PERSONALLY?

Katrín Jakobsdóttir: Upholding democracy and democratic values is maybe the biggest reason I am in politics, so obviously they mean everything to me as a politician. Those of us in power must never forget that we are in our positions to serve the people.

ICELAND IS ONE OF THE MOST PEACEFUL COUNTRIES IN THE WORLD. HOWEVER, ACCORDING TO THE GLOBAL PEACE INDEX, MIGRATION IS INCREASING WORLDWIDE DUE TO INCREASING CONFLICTS. WHICH REFUGEE POLICY IS ICELAND PURSUING?

Katrín Jakobsdóttir: There is a huge crisis going on globally when it comes to displaced people. We must face the fact that we have a record number of refugees in the world due to armed conflict, persecution, and environmental catastrophes.

Iceland will make its contribution to solve the refugee crisis and will accept more refugees!

Iceland will make its contribution to solve the refugee crisis and will accept more refugees. Humanitarian considerations and international...

A Viking epic to conquer them all in ‘The Northman’