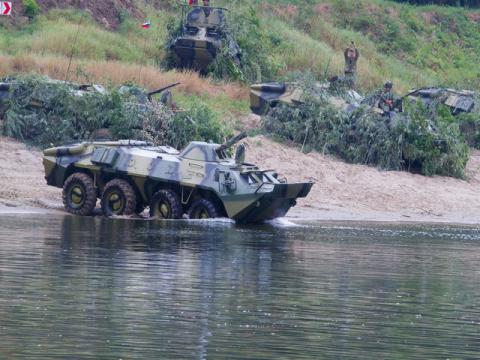 Russian troops in the Moldovan breakaway region of Transnistria began their third yearly joint military games on Wednesday with the local separatist troops, angering the government in Chisinau.

The joint military exercise, which involves "overcoming water obstacles" in the Dniester River - meaning crossing the de facto border with Moldova - was announced on August 13 in a press release from the Russian Defence Ministry.

The Russian Federation still keeps about 1,500 troops of its former 14th Soviet Army, now called the Operative Group of Russian Troops, OGRT, in the so-called Pridnestrovian Moldovan Republic. Moscow also has 400 peacekeepers deployed in the region.

The Moldovan delegation to the Joint Control Commission - the main dialogue framework between the separatists, Russian troops and the government in Chisinau - expressed "bewilderment" at the unauthorised military exercise in a press release sent on Tuesday night.

According to the Moldovan delegation, Russian and local Transnistrian troops deployed amphibious armoured fighting vehicles and military trucks in the area of the Tirnauca beach, Slobozia district, and near the pedestrian bridge over the Dniester River in Tirnauca, in the vicinity of separatist capital Tiraspol.

A report released by the delegation on Wednesday also stated that the military vehicles had no registration plates.

"These actions violate the existing mechanism of the Security Zone, as well as that of the peacekeeping mission. [Russian] representatives of one of the [Unified Control Commission] are not complying with their obligations, ignoring the Commission's basic documents," the...