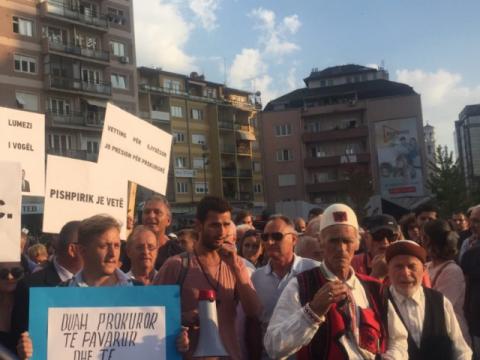 A street protest joined by opposition party supporters in Pristina on Wednesday demanded the resignation of the Chief Prosecutor, Aleksander Lumezi, over claims that he was undermining the fight against corruption.

"This is a protest against the crimes being committed for 20 years now and that are violating our right to economic development and freedom," one of the protesters Krenare Loxha said in an address to the crowd.

"We want to have a state which protects our freedom, not one which violates them," she added.

The rally was backed by supporters of the opposition Vetevendosje party, which called on citizens to "clean up" the state of the judiciary.

Vetevendosje MP Albulena Haxhiu on Wednesday said the prosecutor was to blame for the resignation of Elez Blakaj - who had been in charge of probing the country's notorious list of war veterans - and who on Monday said he had been threatened during his work.

"Blakaj was threatened by the person who should have provided unreserved support to those prosecutors who fight corruption and organised crime," Haxhiu said.

"To have justice and independent institutions, such persons should not be at the helm of the justice system," she added.

The protest came after Blakaj claimed in a open letter that he had also faced pressure from Lumezi for summoning senior political figures in Kosovo to testify.

Lumezi on Wednesday told the media that he intended to stay on, despite the pressure from opposition parties and civil society for him to quit.

"If Kosovo institutions and the Kosovo Prosecutorial Council assess that I have violated the law, I will accept any decision they take, but I will never accept pressure from political entities and civil society that interfere...