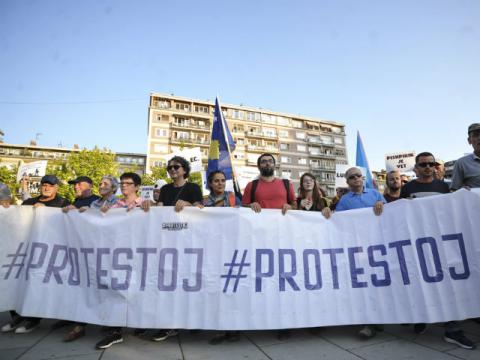 Kosovo civil society group Protestoj [I Protest] has called for a protest on September 5 against President Hashim Thaci, Prime Minister Ramush Haradinaj and the speaker of parliament, Kadri Veseli.

Rron Gjinovci, one of the organisers, told BIRN that the group's demands would be clarified on Monday. "We still did not decide on the demands, but we are in stark opposition to the President, the PM and the speaker of parliament," Gjinovci said.

The announcement comes after the opposition Vetevendosje party also said it would stage a protest next week - though it has yet to announce the exact date.

Its leader, Albin Kurti, said on Thursday that Serbia relied on Kosovo's President, Hashim Thaci, to surmount various obstacles in its path towards European Union integration.

On his Facebook page, Kurti said it was time to oppose the President both inside and outside parliament. It was time to "remove his floor in the Assembly and in Republic Square," Kurti wrote. He called Thaci A "half-President of Kosovo - while the other half is President for Serbia".

The Kosovo and Serbia Presidents are due to meet in Brussels on September for another round of negotiations amid gowing talk of an agreement on changing the borders between Kosovo and Serbia.

An MP for the opposition Democratic League of Kosovo, LDK, Vjosa Osmani, said the protests should take place that day.

"A resolution of the Assembly of Kosovo will be important, but apparently not enough to stop the dangerous adventures of Thaci, damaging the country's sovereignty," Osmani wrote on Facebook. However, her party has not supported the demand for protests on September 7.

Another MP, Alternativa MP Ilir Deda, has called for mass protests on or after September 4, which is when...