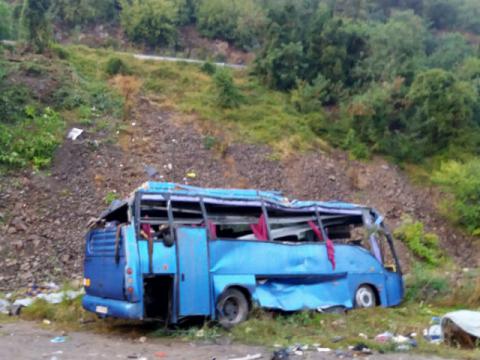 A press release issued after an emergency meeting of the Council of Ministers on Friday morning announced Borissov's intentions.

The resignations come six days after a fatal coach crash near the town of Svoge in the Balkan mountain north of Sofia took the lives of 17 people and left 21 others injured.

"As leaders of the [relevant] ministries, we were unable to protect you from this tragedy and we take political responsibility," Radev said at a press conference at noon on Friday, asked why he was resigning, and if he felt guilt about the tragedy.

He added that "many more" were also responsible, but that it will be up to the prosecution to reveal their names.

The fatal coach crash occurred on August 25 on a curved mountain road close to the town of Svoge, about 50 km north of Bulgaria's capital.

The tragedy lead to an investigation both of the actions of the driver, as well as of the state agencies and private companies that had recently repaired the road and were responsible for maintaining it.

In response to the accident, the government announced a day of national mourning and the creation of a new inter-institutional body designed to combat traffic incidents.

However, some observers noted that a body consisting of almost the same state institutions and with a similar mission - the State-Public Advisory Committee on Road Traffic Safety - has existed since 2003.

"Members of the state administration must be held accountable," Regional Minister Nankov said in a radio interview on Thursday,...

Bulgaria Open Borders to Citizens from EU and Schengen Area