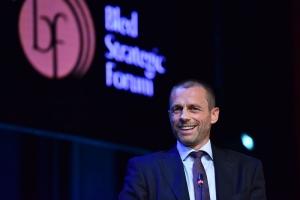 "We cannot stop it, but we can slow it down a little bit," he said at a one-on-one interview at the Bled Strategic Forum on Monday evening.

He admitted that in the new elections for UEFA president will be much easier, as people know him. "You cannot force them to give you support, but it is much easier now when you have the position."

Čeferin complained about what he labelled as conspiracy theories in the media about a man from such a small country as Slovenia holding such an important position.

"The guy from AP said to me nobody knows you, you are from Slovenia, it must be something behind," he said half-jokingly.

Čeferin believes that the popularity of football and the money it generates could be used for good causes. "We distribute 85% of our revenues back to football", he said, with money also going for football pitches in many underprivileged parts...