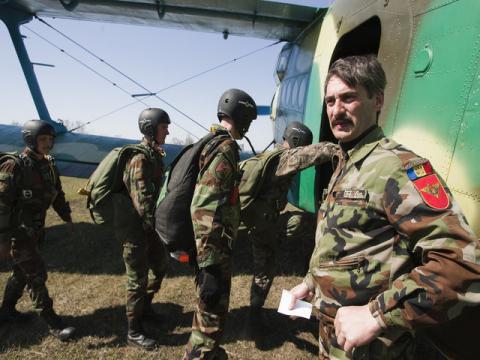 Moldovan Prime Minister Pavel Filip on Thursday said that compulsory military service will be gradually abolished by 2021, as Moldova makes the switch to a purely professional army.

"Moldova cannot maintain a very large army, but we are obliged to have a well-trained and professional army," said Filip, while visiting the military camp at Bulboaca, where Moldovan soldiers were conducting military exercises along with US and the Romanian soldiers.

The purpose of the exercise, Fireshield-2018, was to jointly train sub-units and increase the level of inter-operability between the Moldovan army and other partner countries, especially those in the region with a professional army, like Romania.

The Moldovan government announced a military reform in March.

Citizens between 18 and 27 are currently required to serve one year in the military. Exemptions exist for medical or educational reasons, but bribery is used widely to receive these exemptions.

Over the past year, Moldova participated in various international military exercises with professional armies, especially those from NATO countries.

Moldova's pro-Russian President, Igor Dodon, has tried to block such initiatives by invoking the military neutrality of Moldova.

However, the government has deployed troops anyway at such military exercises, despite his objections.

The director of the Institute for Development and Social Initiatives, IDIS, Viitorul, and former ambassador to the US and Canada, Igor Munteanu, told BIRN on October 2017 that Dodon's actions appeared deliberately coordinated with the Kremlin, designed to undermine Moldova's political and military cooperation with Euro-Atlantic partner states.

Meanwhile, Russian soldiers and Transnistrian troops in the...