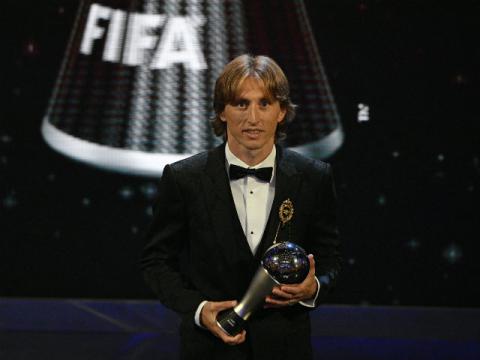 Two months after the Croatian national football team became the runners-up at the World Cup in Russia, captain Luka Modric was given the men's player of the year award by FIFA at a ceremony in London on Monday.

He won this year's award ahead of Liverpool striker Mohamed Salah and Cristiano Ronaldo, his former Real Madrid teammate and twice winner of the 'best player' prize.

"This trophy is not just mine. It's for all my Real Madrid teammates. For all my teammates in the Croatia national team. For all the coaches that I have played for," Modric said at the ceremony.

His speech caused former Croatia national team captain Zvonimir Boban, whose side took third place in the World Cup in France in 1998, to shed tears.

Modric was also crowned best player at the World Cup in Russia this summer and voted the best player in Europe last season. He has won four Champions League titles with Real Madrid.

The unprecedented performance by the Croatian team in the 2018 World Cup threw the country into near-ecstasy for almost a month.

After defeat by France in the final, a massive party erupted around the country, with hundreds of thousands of people pouring on the streets to welcome the players back from Moscow.

Over the days that followed, the main stars, including Modric and team coach Zlatko Dalic, toured towns and cities, sharing their joy with exuberant locals.