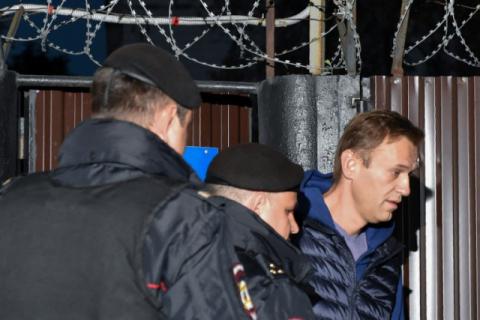 AFP - Russian opposition leader Alexei Navalny was sentenced to 20 days in jail for organising an anti-Kremlin protest in a new court ruling Monday, the day he was freed after spending a month behind bars.

The authorities have turned up the heat on Vladimir Putin's top foe after the Russian president's popularity ratings have taken a beating and the Kremlin suffered a string of rare electoral defeats this month.

The 42-year-old anti-corruption campaigner will have spent a total of 50 days in prison for organising two opposition protests.

Navalny's allies fear that the two consecutive administrative cases mean the authorities may be getting ready to open a criminal probe against him.

In that case he could face a lengthy prison term.

Navalny was detained early Monday immediately upon his release from jail after serving a 30-day sentence for organising an opposition rally in January.

He spent some eight hours in a holding cell ahead of the trial and looked tired and gaunt in court.

The new ruling is related to Navalny's call to Russians to take to the streets on September 9 in protest against a controversial Kremlin-backed plan to raise the state pension age.

Navalny timed the protest to coincide with a nationwide election when Russians voted to elect a Moscow mayor and regional governors, among others.

Navalny was jailed ahead of the protests, when thousands rallied across Russia and more than a thousand people were detained, according to an independent monitor.

The authorities have claimed that because of Navalny, two police officers were hurt during the September rallies,...