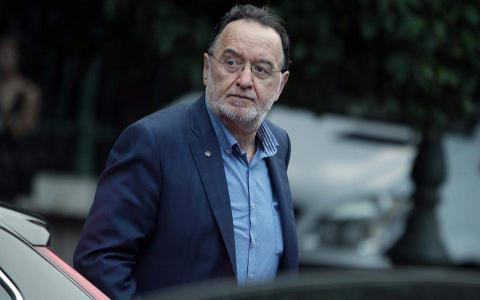 The leader of the far-left Popular Unity party Panayiotis Lafazanis said on Wednesday he refused to provide answers to investigators after he was summoned to Attica Police Headquarters over his alleged illegal possession and use of a gun during protests against foreclosures on the properties of overindebted Greeks.

His summons is part of a wider investigation ordered by an Athens prosecutor. Even though the former SYRIZA minister appeared at police headquarters, he told people who had gathered to protest in his favor that he did not acknowledge the legitimacy of what he called a "civil war" type police department.

"I do not recognize schemes and governmental reactionary approaches against movements and democratic freedoms," he said. He also took a swipe at his former party, which had issued a statement of support, accusing it of "hypocrisy."