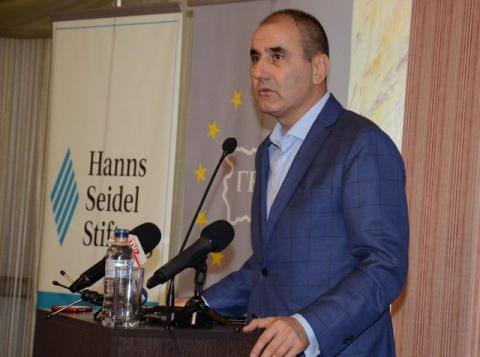 Tsvetan Tsvetanov, the Deputy Chairperson of GERB (majority partner in the ruling coalition), has become a member of Europol Management Board. There he will represent the Joint Parliamentary Scrutiny Group of the Agency. Tsvetanov's election to this position was made with full consensus by the delegations of all national parliaments and the European Parliament.

Tsvetanov was nominatedy for a member of the Management Board of the Agency by Austria. The nomination was based on his experience as Bulgaria's Interior Minister and his work with Europol.

Christian Buchmann, Chairperson of the Committee on EU Affairs in the Austrian Parliament: This is very important for the parliamentary dimension of Europol and that is why the Austrian delegation chose Mr. Tsvetanov as a member of this council.

Manfred Weber, Chairman of the EPP Group in the European Parliament: It is great that such an expert as Tsvetan Tsvetanov will be a representative of the Europol Scrutiny Group. It is a huge responsibility - to link the political approach with Europol as an agency.

Tsvetan Tsvetanov has already participated in the work of the Management Board of Europol.

Catherine De Bolle, Executive Director of Europol: He has always supported our agency, and his contribution has helped to develop police cooperation in Europe. I believe that we, in the law enforcement community, can rely on him. He is also our friend.

Pritt Parkna, Chairperson of the Management Board of Europol: I highly appreciate the cooperation of Mr Tsvetanov, who has shown he is very committed to working with Europol, and shows it through his work in Parliament. I very much hope that the Europol Management Board will find a good way to cooperate with the Joint Parliamentary Scrutiny Group...