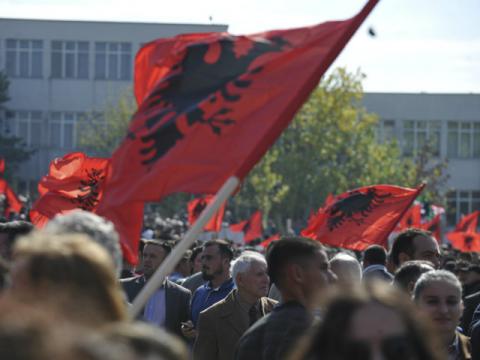 Thousands of people from across Kosovo descended on central Pristina on Saturday for a protest organised by the country's main opposition force, Vetevendosje, against President Thaci and his push in recent months for "border corrections" between Kosovo and Serbia.

During the rally, Vetevenodje's leader, Albin Kurti, told the crowd gathered at Skanderbeg Square that they would not accept "new pain and new compromises", referring to a possible final deal with Serbia that would include border changes.

"As if the poverty and corruption were not enough, this president showed up with painful compromises, not painful for Serbia but for Kosovo," Kurti said, adding that "the border correction is a mistake for Kosovo".

In an event that coincided with the rally, President Thaci made a rare visit to the Serb-run north of the country, stopping in the town of Zubin Potok and taking a boat ride on the nearby disputed Gazivode Lake.

The addition of Kosovo police being present sparked reaction from Serbia, with the head of the Serbian government's office for Kosovo, Marko Djuric, stating that Serbian military and police were on high alert as a result.

Serbian Interior Minister Nebojsa Stefanovic also announced that he had "ordered the police director to put all special and special police units in the state of most readiness" as a result of what he called "an Albanian attack against the north of Kosovo."

However, NATO's peacekeeping force in Kosovo, KFOR, confirmed the police personnel were in the area as a security measure during Thaci's visit.