What do EU officials say about Macedonia referendum? 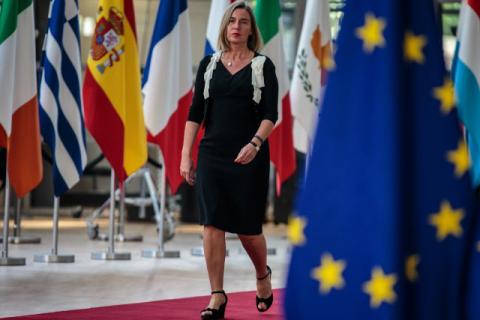 EU foreign policy chief Federica Mogherini and EU Commissioner Johannes Hahn have reacted to a referendum in Macedonia that failed due to low turnout.

The referendum question was, "Are you in favor of membership in the EU and NATO by accepting the agreement between the Republic of Macedonia and the Republic of Greece?"

In a joint statement on Monday, the two EU officials said that "an overwhelming majority of those who exercised their right to vote said yes to the Prespa agreement on the name issue and their European path."

"On 30 September, citizens of the former Yugoslav Republic of Macedonia had the opportunity to vote for the future of their country. In a peaceful and democratic vote an overwhelming majority of those who exercised their right to vote said yes to the Prespa agreement on the name issue and their European path," a press release said.

Mogherini and Hahn noted that the Macedonian Assembly "will now be called upon to proceed with the next steps for the implementation of the name agreement by deciding on the adoption of the constitutional changes."

"This is a historic opportunity not only for reconciliation in the region, but also for decisively moving the country forward on its European Union path. It is for all political and institutional actors now to act within their constitutional responsibilities beyond party political lines. The European Union will continue to fully support and accompany the country, its institutions and all its citizens," Mogherini and Hahn concluded.

Kon: Total ban on any contact; There is no talk of repealing measures VIDEO

Curfew from Friday through Monday

Kon: If we want to impose more drastic measures, we should do it now

26 years since the death of Dada Vujasinovic: Investigation still open