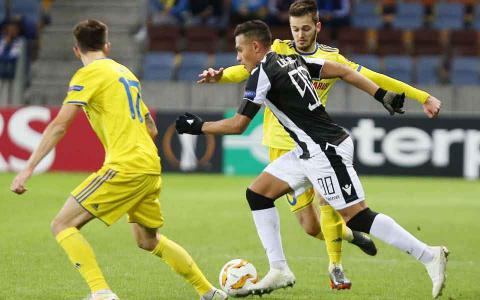 Olympiakos surrendered its early lead as it crumbled at Milan to concede three goals in 10 minutes, but PAOK built on its own early lead to defeat host BATE Borisov in Thursday's group games for the Europa League.

AC Milan beat Olympiakos 3-1 at the San Siro despite the Greeks' lead up to the 70th minute through a Miguel Angel Guerrero strike on the 14th minute.

The Reds, featuring a completely changed lineup from the home loss to PAOK on Sunday, appeared to hold on to their advantage against a frustrated Milan. However the introduction of Patrick Cutrone and Hakan Calhanoglu tipped the balance in the Italians' favor.

It was Cutrone who equalized for the hosts on the 79th and Calhanoglu who fed Gonzalo Higuain six minutes later and the Argentine made it 2-1 for Milan. Then Calhanoglu spotted Cutrone in the box and he sealed it for the "Rossoneri".