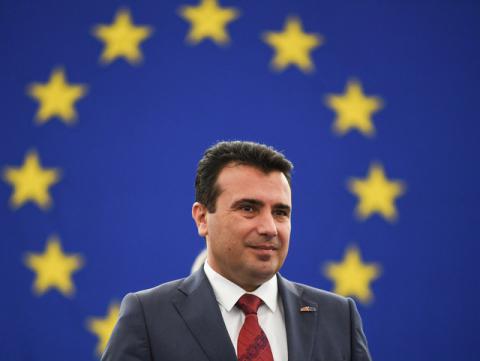 The vice-president of Macedonia's main ruling Social Democratic Party, Petre Shilegov, on Wednesday confirmed that his parliamentary group has begun talks with its opposition rivals in parliament to persuade them to vote for the historic "name" agreement with Greece.

"Talks were first launched with the legislators, to test their readiness [to possibly support the agreement]. Later, if necessary, the level of talks will increase," Shilegov said.

The head of the Social Democrats' parliamentary group, Tomislav Tuntev, also told TV Alsat M on Thursday that he had scheduled informal meetings with three opposition MPs, without revealing details.

Xhevad Ademi, an MP from the junior ruling party, the Democratic Union for Integration, DUI, said they were also attempting to reach out to the opposition right-wing VMRO DPMNE party, and that the DUI leader, Ali Ahmeti, had met opposition VMRO DPMNE party leader Hristijan Mickoski after Sunday's failed referendum, which failed to reach the necessary turnout.

"We insist that solutions are not exhausted. We hope that there are responsible politicians and visionary figures within VMRO DPMNE," Ademi said.

Over 90 per cent of voters in last Sunday's referendum supported the "name" deal with Greece - but the low turnout rendered the result invalid.

Macedonia's Prime Minister, Zoran Zaev, said he would give it until October 10 at the latest to try to persuade the opposition to support the deal in parliament.

If not, he said the only way to secure a two-thirds majority in parliament to change the country's name would be through early elections.

The governing coalition led by his Social Democrats, SDSM, and its supporters among smaller parties has the backing of 71 of the 120 MPs in the...