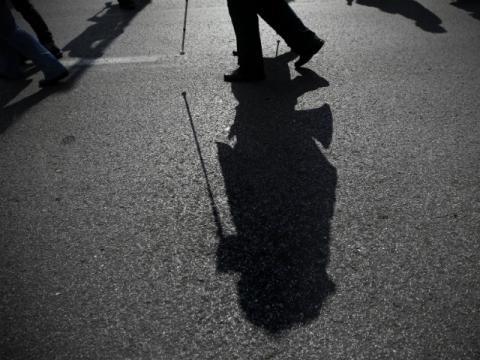 The shadow of a blind man marching is reflected on the pavement. Photo: EPA/ALKIS KONSTANTINIDIS

Despite some initial progress in this field, the process of moving people out of these institutions and into community-based living has stagnated, they said.

Based on government figures for 2017, more than 7,800 adults and children with disabilities live in state-run institutions. More than 2,000 others live in privately run but state-funded institutions.

According to official data, between 2011 and 2016, the government provided support for about 700 of them to move out of state-run institutions and into organised housing in the community.

"The Croatian government should follow through on its promises to respect the rights of everyone who has a disability to live independently and make their own choices," said Emina Cerimovic, senior disability rights researcher at Human Rights Watch.

The government is also urged to develop services in the community.

Government figures show that as of April 2018, more than 2,455 adults with disabilities were living in foster care.

On May 21, the government published a draft Law on Foster Care that would give priority to placing adults with disabilities in the foster-care program, including without their consent.

Organisations have criticised placing adults in foster care. People with psychosocial disabilities in psychiatric hospitals and those in foster care remain excluded from the government's de-institutionalisation efforts.