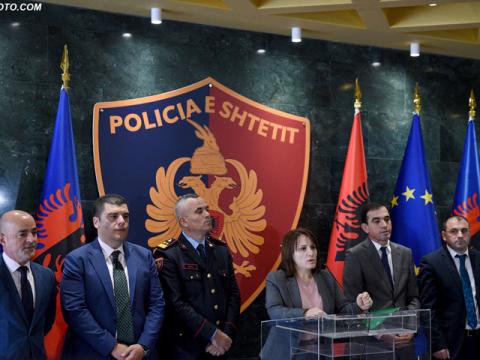 Multiple police operations were staged on Sunday across Albania, with officers arresting more than two dozen people suspected of drug smuggling and confiscating guns and narcotics, police and prosecutors announced on Monday in Tirana.

The head of the Serious Crime Prosecution Office, Donika Prela, said the investigation started back in 2016 and was then extended across the country.

Thousands of hours of intercepted conversations, along with visual surveillance using cameras and drones, were used to identify 13 cases of drug smuggling, Prela said.

The General Director of the Albanian Police, Ardi Veliu, said 27 people were arrested in 12 towns across the country.

The biggest operation, in which eight people were arrested, was conducted around Shijak in central Albania, where several drug smuggling groups have been thought to be active for at least 20 years.

Shijak is known amongst Albanians for having scores of luxury villas and wedding parlours, often built with inspiration from the drug lord Tony Montana's house in the film 'Scarface'.

A few days ago, Albanian police also found a heroin laboratory in the northern area of Has, on the border with Kosovo.

The EU ambassador in Tirana, Luigi Soreca, hailed the operations.

"Now we expect that prosecutions and convictions would follow for a solid track record," he added.