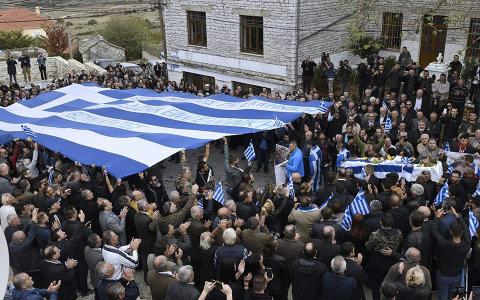 Albania said Friday that 52 Greek nationals who turned out for the funeral of a dual Albanian-Greek citizen who was fatally shot in a gun battle with Albanian police during an annual celebration are considered "personae non gratae" and would not be allowed to enter the country again.

A statement by Albania's Foreign Ministry alleged that the 52, who were not identified by name, participated in organized acts against Albania. It also said they made public statements against constitutional order, national security and public order.

The funeral of 35-year-old Konstantinos Katsifas was attended by hundreds of Greek nationals - many of them holding Greek flags - who traveled on buses to the village of Bularat in southern Albania from Greece.