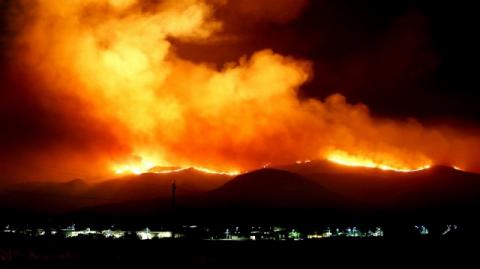 The death toll from wildfires raging in California rose to 31 on Sunday after six more people were found killed in what was poised to become the deadliest wildfire in state history, reported Reuters.

Officials said the bodies of five people were found in their burned-out homes and the sixth was found in a vehicle in northern California's Camp Fire, Butte County Sheriff Kory Honea told reporters on Sunday evening.

More than 200 people are still unaccounted for, Honea said.

The so-called Camp Fire in the northern part of the state has claimed at least 29 lives since it broke out on Thursday. Hundreds of miles (km) to the south, at least two people have died in the Woolsey conflagration threatening the wealthy beach community of Malibu, near Los Angeles.

Looting was reported in the southern fire area and arrests were made, police reported.

Hot dry winds expected to blow until Tuesday whipped up the flames and heightened the urgency of evacuation orders, officials said.

Several officials urged residents to heed evacuation orders, noting they themselves had followed orders to leave their homes for safety.

Over 6900 buildings have been destroyed, more than 300,000 inhabitants have been evacuated. Among them are a number of celebrities such as Lady Gaga, Kim Kardashian and Martin Sheen. Actor Gerard Butler told Instagram that his home in Malibu was destroyed.