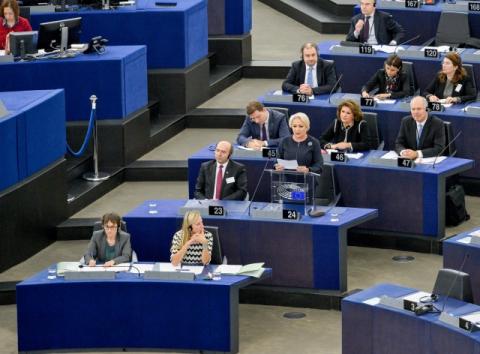 The European Parliament adopted a resolution expressing concern about the rule of law in Romania on Tuesday, the same day as the European Commission released a monitoring report criticising the country for backtracking on the fight against corruption.

The European Parliament resolution said that several pieces of justice legislation and criminal codes adopted in 2018 could "structurally undermine the independence of justice and the ability to fight corruption effectively in Romania, as well as to weaken the rule of law".

Manfred Weber, the head of the European People's Party group, the largest in the EU legislative body, told journalists before the vote that he felt justice in Romania was "under pressure".

"We have seen people [during protests on August 10] beaten by the police, which is not acceptable. The government needs to change this direction, EU values are not to be negotiated," Weber said.

A push by the ruling Social Democrat Party to change justice legislation and reclassify some corruption-related offences as non-criminal acts has triggered large protests over the past two years.

Meanwhile the European Commission on Tuesday to published its latest reports on Romania and Bulgaria as part of its Cooperation and Verification Mechanism. The Commission has been keeping both Bucharest and Sofia under close monitoring since they joined the EU in 2007.

The report on Romania was the toughest on the country's government so far, adding eight new recommendations to the existing 12 from the previous report. The Commission asked the government in Bucharest to stop modifying justice legislation and prove they are committed to ensuring an independent justice system.

Meanwhile, Brussels announced that Bulgaria might no longer be...