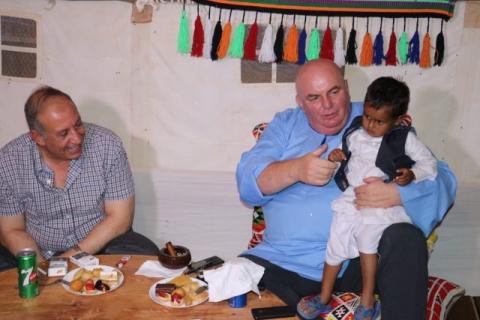 On the third day of the visit of Dragan "Palma" Markovic to Egypt, the delegation he is heading visited a Bedouin village.

The trip to the village of Hammata - locate south of Marsa Alam - shows the significance assigned by the hosts to the visit of Markovic - president of the United Serbia (JS) party, member of the Serbian National Assembly, and President of the Assembly of the town of Jagodina.

The host to the Serbian delegation, General Ahmed Abdallah, organized the visit to the village, where Markovic and the delegation received a warm welcome from a large number of Bedouins.

They demonstrated a traditional sword dance, their music, way of life, and cuisine.

The Bedouin are known for their strong devotion to tradition, and their unwillingness to accept different culture and customs.

They live and work as they have done for centuries - farming camels and goats, and living in tents scattered around the vastness of the desert.

The Bedouin community visited by the Serbian delegation has 280 children, who were happy to approach Markovic and socialize with him.

He, in turn, danced the traditional dance with the hosts, heard their traditional music - but failed to teach them a Serbian tune - namely, folk star Ceca Raznatovic's early hit, "Cvetak Zanovetak."

The Bedouin repaid him by chanting Markovic's name, and that of General Abdallah.