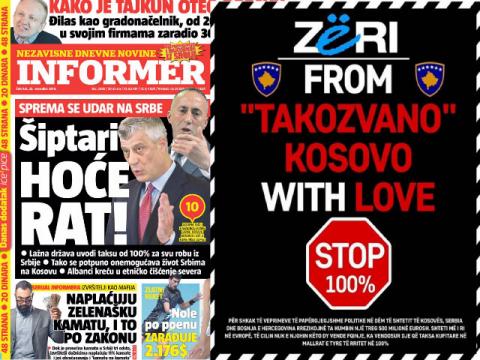 Serbian media on Thursday accused Kosovo of resorting to "war" and economic "cleansing" following its decision to hike import taxes to 100 per cent - while Kosovo media supported the measure, adopted in retaliation for Belgrade's role in Kosovo's failed Interpol membership bid.

The front page of Zeri, on the other hand, featured a headline "From 'So-called' Kosovo With Love" and a stop sign - referring to the practice of Serbian officials and media of calling Kosovo a "so-called state".

"Due to irresponsible actions done to the detriment of the Kosovo state, Serbia and Bosnia and Herzegovina risk losing a 500-million-euro market," Zeri wrote on its front page.

Almost all Serbian tabloids close to the ruling Progressive Party warned of possible armed conflict, with the daily Kurir calling Pristina's decision an "Introduction to War".

Meanwhile, Kosovo Albanian newspapers hailed the government's decision, some calling it a deserved act of retaliation for Serbian lobbying against Kosovo's membership of Interpol.

Kosovo's bid to join the global police organisation failed on Tuesday when it did not secure enough votes at Interpol's general assembly in Dubai.

Under the headline "Kosovo increases sanctions against Serbia, EU and...