"Brothers and sisters, no turning back from here"/PHOTOS 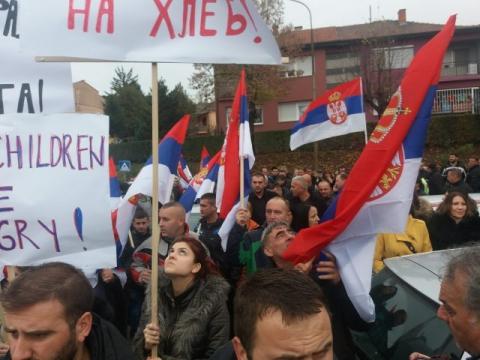 The protest was attended by a large number of citizens of the northern part of the town, who were first addressed by the now former mayor, Goran Rakic, who, about an hour earlier, resigned along with other three Serb mayors in northern Kosovo.

"We want to send a clear message to the media, to Pristina, to Brussels and the EU, that these are peaceful protests, and we would not want things taken out of context and someone calling these protests by any other way. This is a peaceful, democratic and civilized way to respond to Pristina, to their brutal, non-democratic and uncivilized decisions - or what should we call those, without offending them," Rakic told the crowd at the beginning of his address.

"The international community keeps silent to all these decisions (by Pristina). Today, the assemblies of the four municipalities of the north of Kosovo have been held when we resigned, and starting today, the administration of Pristina's local self-government no longer exists. It does not exist - not because of some whim of ours, but because of (Pristina's) moves that prevent the normal life of the Serb people in Kosovo. The taxes (increased recently by 100%) introduced by Pristina mean that our children tomorrow will not have the basic conditions for life, food, water," said Rakic.

According to him, the reason for the protest and the resignations was - in addition to the disgraceful taxation - also the brutal action of the (Kosovo police) Rosu unit, that stormed the north of Kosovo (last Friday), although it has been clearly stated in (UN Security Council) Resolution 1244 that the only armed formation could be KFOR. Pristina does not respect this decision either,...