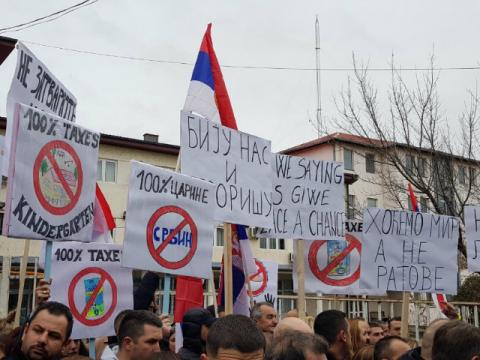 The protest started soon after the mayors of four Serb majority municipalities in northern Kosovo resigned on Tuesday over the tariff hike on imports from Serbian, which took the rate from 10 per cent to 100 per cent. The move was retaliation for Belgrade's negative behaviour, Pristina officials said.

Goran Rakic, the president of the main Kosovo Serb party Srpska Lista and the mayor of North Mitrovica until he resigned, accused the international community of remaining silent about the "brutal and undemocratic" decisions made by Pristina.

His announcement that the mayors of all four Serb-majority municipalities in northern Kosovo have resigned in protest, and that the local administration is no longer under the "Pristina system" was hailed by applause.

"This is not because of a whim of ours, but because of the moves that do not allow Kosovo Serbs to have a normal life," Rakic said.

He argued the raised import taxes mean that "our children might not have normal living conditions tomorrow".

Among the protesters was controversial Kosovo Serb businessman Zvonko Veselinovic, who is being tried for alleged corruption in a road-building scheme.