Serb Mayors in Kosovo to Resign Amid Tensions 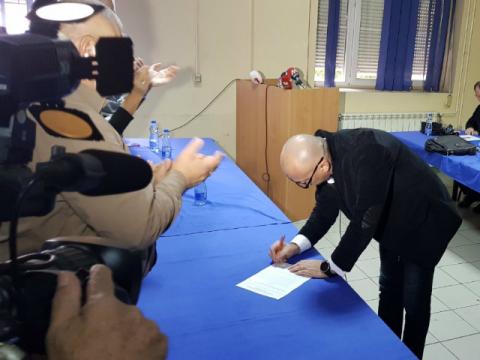 The Serb mayor of North Mitrovica, Goran Rakic, told an extraordinary session of the local assembly in the northern Kosovo town on Tuesday that he is resigning because of Pristina's decision to increase import tariffs on Serbian goods and because of violations of the human rights of Serbs living in Kosovo.

Rakic also said he was resigning because of an operation by police special forces in northern Kosovo on Friday, in which three Serbs were arrested for suspected involvement in the murder of Kosovo Serb politician Oliver Ivanovic, and a fourth Serb detained for obstructing police officers.

Local assemblies in all four Serb-majority municipalities in northern Kosovo have also decided to end all communication with Kosovo state institutions.

The head of the Serbian government's office for Kosovo, Marko Djuric, told Serbian media earlier on Tuesday that the mayors of all four Serb-majority municipalities have informed him that they will resign today.

"Serbian representatives [from North Kosovo] informed me that starting from today, the municipal administration that functioned according to the Pristina-Albanian system in the north [of Kosovo] will no longer function," Djuric told Happy TV on Tuesday morning.

Djuric added that the local assemblies and all other local bodies cease to operate until the withdrawal of what he called "discriminatory measures and the cessation of human rights violations".

Serbs in north Kosovo have announced they will also hold a major protest on Tuesday against the rise in import tariffs.

The Kosovo government raised tariffs on imports from Serbia and Bosnia from 10 to 100 per cent on November 21. The move came in retaliation for both countries' negative behaviour towards Kosovo, Pristina...