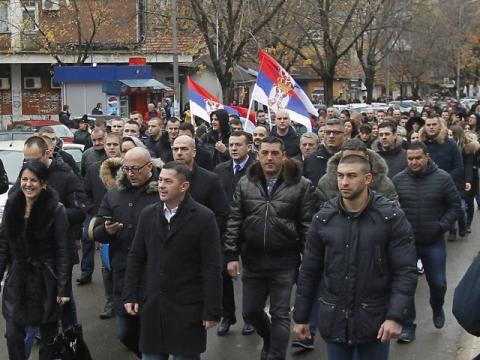 As a crisis over Kosovo's import tax hikes continues in Serb-majority northern Kosovo, a former Serbian Minister for Kosovo, Goran Bogdanovic, says that he expects a "status quo" to settle in before the import taxes on Serbian products are scrapped.

"I believe that this decision [to raise taxes on Serbian imports] will be revoked very soon," Boganovic told BIRN.

EU foreign policy chief Federica Mogherini spoke on the phone to Kosovo President Hashim Thaci on Wednesday, telling him that the 100 per cent tax increase on Serbian and Bosnian products does not bring a solution to Kosovo's aspirations for its present and its future.

"This is a measure that does not help to build good neighbourly relations and needs to be revoked," a press statement from Mogherini's cabinet said.

Kosovo increased import taxes on Serbian goods to 100 per cent on November 21, after Serbia blocked its attempts to join the global police body, Interpol.

Two days later, Kosovo police arrested three persons in the divided northern town of Mitrovica in connection with the murder of the Kosovo Serb politician Oliver Ivanovic who, before he was killed, had become ever more critical of the Serbian government.

Both actions have angered Kosovo Serb leader and the mayors of four municipalities in the north have since resigned, announcing daily rallies against the tax hike and the arrests.

By law, new local elections should be held within 45 days of the mayors' resignations.

But Serbian political analyst Cvijetin Milivojevic said this might be complicated, because while Pristina could call elections, Belgrade might call parallel elections of its own.

"Which of these elections the Serbs would participate in is a matter of their own choice,"...