18 Billion Euros in Exports for 8 Months in Bulgaria 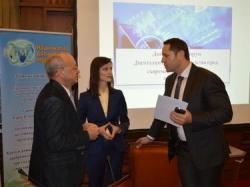 Bulgaria exported goods and products for nearly 18 billion euros in the first eight months of 2018. This was announced by Deputy Minister of Economy Alexander Manolev during a Discussion Forum on "Digital Challenges for Modern Companies". The event is organized by The Chamber of Commerce and Industry and the National Business Network, and Mariya Gabriela, European Commissioner for Digital Economy and Digital Society, Tsvetan Simeonov, Chairman of BCCI Managing Board and Desislava Ivanova, Chairperson of the Management Board of the Association, took part in its opening.

"There is no easier and more accessible tool to support Bulgarian exports from the digitization of small and medium-sized enterprises and increase the share of e-commerce," said Alexander Manolev. In his words, this may not be a central theme, but the introduction of innovation and the modernization of production, but in no case should it be underestimated. That is why the Ministry of Economy strives actively to partner with business and global leaders in the field of information and communication technologies.

The Economic Deputy Minister has set an example for Google's joint training with more than 26,000 people in the field of digital skills. "We are launching a training program with ebay that will target small and medium enterprises and startarts in Bulgaria," said Alexander Manolev.

According to the statistics presented by him over the last 10 years, over EUR 1 billion has been invested through the OP "Competitiveness" and OP "Innovation and Competitiveness" in support of small and medium enterprises. "A large part of these funds were precisely for the introduction of innovations and technological solutions," Deputy Minister Manolev said. He also drew attention to the...