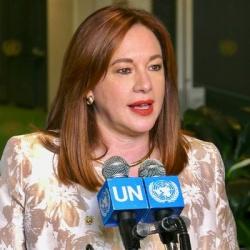 UN Secretary-General Ecuadorian Maria Fernanda Espinosa announced her intention to step up the collective fight against the pollution caused by plastic waste, which affects people all over the planet.

"80 percent of plastics end up in the oceans, between 8 and 12 million tons each year," said Espinosa at a press conference.

"There will be more plastic than fish in the seas by 2050. Plastic microparticles are already in salt and water, and every person on the planet is believed to have them in their bodies," she warned.

"What can we do to combat this threat - we can ban the use of non-reprocessing plastic items in UN buildings in New York, Geneva and Nairobi," said Espinos and noted that she always wears a thermos with water and does not buy plastic bottles.