Today is the Student's Holiday, Celebrated in Bulgaria since 1903 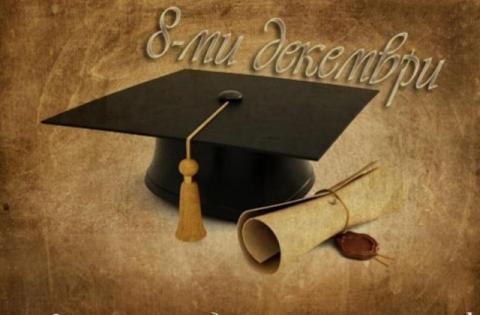 Today is the holiday of Bulgarian students.

In 1897, Professor Ivan Shishmanov, the Minister of Enlightenment, asked the first Higher School in Bulgaria to have "a special, own holiday". At its meeting on November 2, 1902, the Academic Council of the Higher School set the day of the enlightener St. Kliment Ohridski - November 25 (December 8 - a new style), for this holiday.

For the first time the students marked it in 1903 in the hall of the Slavyanska Beseda chitalishte in Sofia. In 1905, in the Regulations of the Higher School, which is then called Sofia University St. Kliment Ohridski, the text was written for the first time that November 25 was a patron saint of the university. Since 1916, as a result of the official introduction of the Gregorian calendar in Bulgaria, the annual university holiday shifts 13 days ahead and begins to be celebrated on December 8. Thus, with the years, the oldest and most prestigious higher school in Bulgaria established and approved December 8th as a symbolic date of university festivity.

The December 8 celebration was canceled after 1944 and replaced with the date 17 November, when it was the International Day of Student Solidarity. In 1962, the high school holiday on December 8 was restored.

After 1968, when the Bulgarian Orthodox Church returned the old style to the Julian calendar, Kliment Ohridski again becomes November 25th. The Academic Council of the Sofia University decides to dedicate the patron saint of the higher school to the general on December 8th and defines its official celebration 25th November - the day of the patron of the University - Kliment - Archbishop of Ohrid.

December 8th remains a secular date and continues to unite Bulgarian students with their extremely popular...

Kristalina Georgieva: Bulgaria's Entry into the Eurozone, Planned for 2023, is "Entirely Foreseeable"

President Radev: Education, Child Health and Young Families Should be a Priority for Politicians