Who is conducting Kosovo dialogue: US and Russia, or EU? 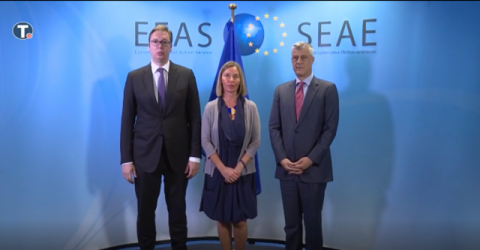 An EU spokesperson reacted to this by saying that the dialogue is headed by the EU, not the US and Russia.

According to the Albanian languge newspaper, the US president is preparing a ceremony to for the signing of an agreement on normalization of relations, which would be done by Hashim Thaci and Aleksandar Vucic.

According to the report, this was preceded by Thaci's meeting with US ambassador in Berlin, which the public ha not been informed about.

Those with knowledge of this process assess that until the involvement of the US and Russia in reaching an agreement came about due to the complex process of dialogue. "Bearing in mind the complexity of the process of reaching a comprehensive agreement between Kosovo and Serbia, this issue has become a topic within US and Russian diplomacies," said political journalist Krenar Shala.

However, according to him, this does not mean that negotiating teams of both sides will have no influence in the process. Shala also pointed out that the chances of reaching an agreement are "equal to zero unless these great powers reach agreement."

Maja Kocijancic, a spokeswoman for the EU foreign policy chief Federica Mogherini, who mediates in the dialogue, said Mogherini heads the process while "the US is a partner with whom there is close cooperation on a series of issues, including the Western Balkans."

She told another Pristina-based daily, Gazeta Express, that the EU is working on the next meeting within the framework of the dialogue at the highest level, but added that the situation has been "frozen" after Pristina raised taxes on goods from central Serbia by 100 percent.

Kocijancic once again reminded that Mogherini urged Pristina to abolish these taxes and...