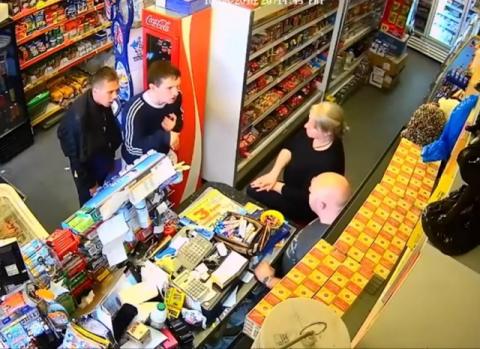 A Bulgarian store owner was beaten by two people in Scotland. The incident took place a few months ago, but it is not clear until now that the attackers received light sentences. That's why the 39-year-old Bulgarian decided to distribute camera footage from his store. The recordings hear his attackers telling him that this is their country, and shortly thereafter attack him, informs NOVA.

Together with his wife, Ilham Ahmedov has lived in Scotland for two years. They earn a living with a small shop.

On August 10 last year, two teenagers were drunk. After Ilhan refuses to sell them alcohol, they become aggressive. In seconds, they are out of the store. The figures provided to us by Ilhan show how the three - both the customer and the seller - fall to the ground. Then, the 39-year-old Bulgarian is hit and kicked in his face as he tries to return to the store.

A few months later the attackers were convicted. One at 18 months in prison and the other one in a two-year suspended sentence and having to pay £ 2,000 in indemnity to Ilhan.

Scotland is Taking Steps towards Independence

Boris Johnson Rejected Sturgeon's Demand for Referendum
SportsMin Stroe to conduct thorough assessment of Romania getting ready to host EURO 2020 matches
"If Kosovo and Albania can, why can't we?"

Corbyn, Farage and Sturgeon Have All Opposed the New Brexit Deal

Disease Turns Deer into Zombies and IT IS NOT A JOKE!

A Brexit-Led Breakup Could Make Britain Another Yugoslavia