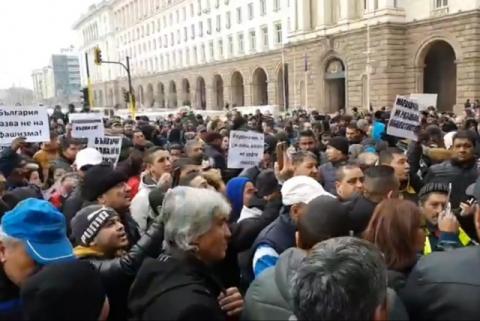 More than 200 people of Roma origin went on Monday to protest at the Council of Ministers with the request for the resignation of Deputy Prime Minister and Minister of Defense Krassimir Karakachanov. Their discontent was provoked by the demolition of the Roma neighborhood in the village of Voyvodinovo in Plovdiv and Karakachanov's comment that "the Gypsies have become extremely insolent". Protesters blame the deputy prime minister of "ethnic hatred"

The new outburst of pre-election ethnic tensions began with the beating by two Roma brothers to a soldier in the center of Vojvodinovo. Karakachanov's reaction was immediate. He visited the village and made his comment on "the extremely insolent Gypsies," and then provoked the demolition of the Roma neighborhood.

The Roma protested in Sofia with "Karakachanov, Go Away", "The Voivods do not break down houses" and "Bulgaria says No to Nazism." The protesters want Karakachanov's resignation because it deepens the problem of the lack of rights of the Roma minority.

Some of the protesters also asked the media. One of them was, "How was the electricity paid in the Roma neighborhood in Vojvodinovo, since the buildings there were illegal?" The other question was: What kind of business does Karakachanov have in Vojvodinovo and why a deputy prime minister raises ethnic tensions?

"Dear brothers and sisters, let us show that we are Bulgarian citizens, that we are part of Bulgaria and we are not refugees, we are not foreigners and they have to treat us properly. NO to separation, insults and racism, but of understanding, "says a participant in the protest.

The leaders of the Roma demonstration add that more than 1000 people have already signed in their electronic petition, demanding the resignation of...