Moscovici hails Prespes accord in meeting with Tsipras 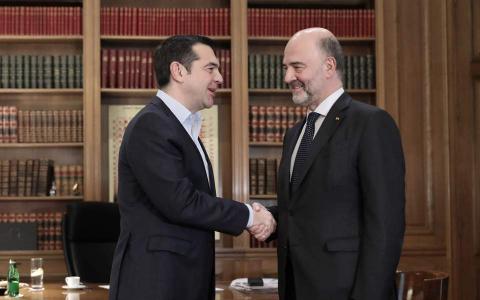 The European Commission welcomes the Prespes accord for settling the decades old name dispute between Greece and the Former Yugoslav Republic of Macedonia, EU Commissioner for Economic Affairs Pierre Moscovici said on Wednesday.

Speaking at a meeting with Prime Minister Alexis Tsipras during a visit to Athens, on the invitation of the Greek-French Chamber, Moscovici reiterated the belief that the name deal is in Greece's best interest.

The French official also prompted a response from Tsipras after referring to Greece's northern neighbor as "Macedonia," with the Greek premier saying "the next time you are here you will be obliged to say 'North Macedonia.'

"This is the most important thing for us," added Tsipras, hours before a confidence vote in Parliament following the collapse of the government coalition over differences between ruling SYRIZA and junior partner...