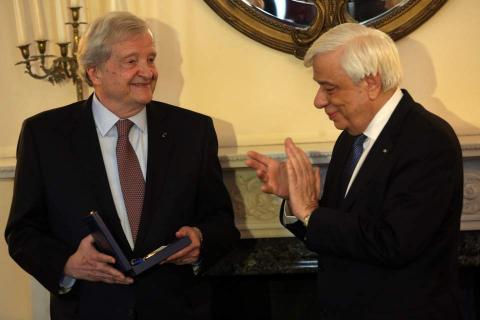 Greek President Prokopis Pavlopoulos on Friday bestowed the Order of Honor on Harvard University Professor of Classical Studies and Comparative Literature Gregory Nagy, in a ceremony at the Presidential Mansion in Athens.

"Your landmark studies on classical Greek poetry have always centerd on Homer's epics, a fact that places you among the world's leading Homeric scholars," Pavlopoulos was quoted by the ANA-MPA news agency as telling Nagy, praising the respected academic's contribution to the study of archaic Greek poetry.

On his part, the Hungarian-born professor thanked Pavlopoulos for the honor and pledged to continue his work focusing on the global heritage of Greek civilization, the ANA-MPA reported.

Nagy has been director of the Harvard-affiliated Center for Hellenic Studies in Washington DC since 2000 and since 2013 has offered his most popular course...