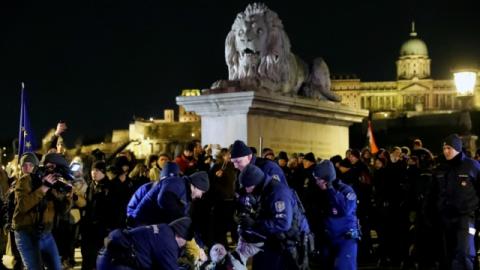 Thousands of Hungarians took to the streets on Saturday in protests against nationalist-conservative Prime Minister Viktor Orban in the latest of a wave of demonstrations which began late last year over a labour reform branded a "slave law" by the opposition.

Around 2,000 people gathered in the capital Budapest, with hundreds more marching in each of the main provincial capitals, with protesters' barricades blocking traffic on several roads.

The latest day of action was called by the opposition, trade unions and NGOs but the numbers who turned out were down on the 15,000 people who gathered in central Budapest on December 16.

The wave of protests began days earlier after the Hungarian parliament passed changes to the labour code proposed by Orban's right-wing Fidesz party that critics call a "slave law".

The controversial law hikes the maximum annual overtime hours that employers can demand from 250 to 400 hours.

The protests have succeeded in uniting all shades of the normally fractious opposition, with unions also throwing their weight behind the movement and threatening to organise a general strike unless the law is scrapped.

Since he was re-elected for a third term last April, Orban, an admirer of Russian President Vladimir Putin, has according to his critics pursued reform policies aimed at creating an "illiberal democracy".

On Thursday the European Parliament backed a draft law under which member states that undermine the bloc's democratic principles could lose EU funds.