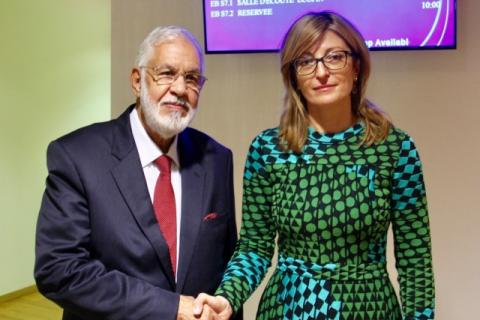 Bulgaria's Prime Minister Boyko Borissov had a telephone conversation with Prime Minister Saraj last week and invited him to visit Bulgaria, which he accepted.

Invitations were also made to the foreign and home affairs ministers.

"We remember the good work many Bulgarian companies did in our country, we have to restore our relations to their previous level," Sayala said at the meeting.

"All stadiums in Libya are built by Bulgarian companies and are still in excellent condition. Your workers are very industrious," he added.

Meanwhile, Minister Zaharieva said they need to strengthen bilateral ties, especially in the field of economy.

"Our engineers and doctors played an important role in Libya's public and economic life," she added.

The two ministers agreed that the visit of Al-Sirraj to Bulgaria be accompanied by a business forum to discuss the resumption of Bulgarian export to Libya.