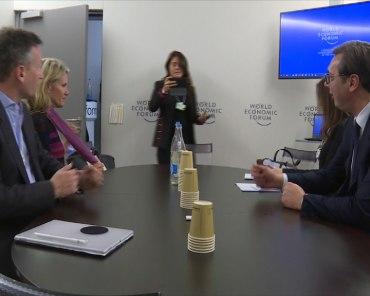 The Serbian president asked them to continue and accelerate the works, noting the project was hugely important for Serbia, Tanjug is reporting.

According to estimates, a large number of people could be working in western Serbia from 2024, when jadarite mining is expected to begin there, Vucic told reporters after the meeting.

"If they (Rio Tinto) establish a partnership with China, it would mean a factory of electric buses and other electric vehicles would be set up in our country. Then Serbia would have an enormous comparative advantage over everyone else and that is important for us," Vucic said.

Rio Tinto's Jadar Project relies on one of the world's major lithium-borate deposits, situated near the city of Loznica.

Transfer to Fortenova close as loan deal signed to restructure Mercator’s debt
Forbes: Greece will reportedly reopen to US tourists next week if they meet these conditions

The main CIA man in Serbia was Iceman who betrayed Milosevic

So much for religious and ethnic tolerance in Kosovo