Giant Kuker Masks Exhibited Under the Largo Dome in Sofia 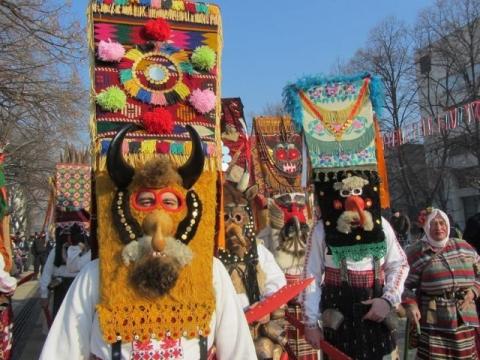 Scary giant kuker masks under the Largo dome in Sofia have become a photo attraction for city residents and guests. They are a trademark of the Yambol International Masquerade Festival Kukerlandia, which this year celebrates its 20th anniversary, the Municipality of Yambol said.

The 3-m figures present the typical kuker masks of that part of Bulgaria. Because of its preserved traditions, the area received the name of Kukerlandia, and the annual festival organised by the municipality was named after it. According to researchers, the roots of the kukeri games originate from pagan times and are associated with the ancient Thrace culture and the Dionysian festivals. The tradition of the kukeri is still alive today in local settlements, making Yambol one of the centres of masquerade games in Bulgaria.

The giant masks will remain in Sofia until February 1, after that they will be displayed in Plovdiv, Stara Zagora, Haskovo, Burgas and Sliven. On February 28 they will return to Yambol for the carnival procession at the beginning of the Kukerlandia festival. For four days they will be part of the traditional Walk of Giant Masks, a symbol of the festival since 2011. To date the walk already includes 20 artistic installations.