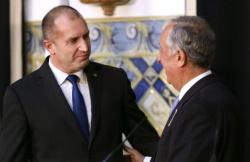 (Xinhua) -- The relationship between Bulgaria and Portugal is a symbol of the future of Europe as the two countries can cooperate and hold dialogue while seeking common ground on the basis of European values, visiting Bulgarian President Rumen Radev said here Wednesday.

Speaking at a joint press conference with his Portuguese counterpart Marcelo Rebelo de Sousa, Radev said that he was pleased to find that Portugal has many similar positions with Bulgaria regarding the future and stability of Europe, Brexit and Western populism.

Asked about Britain's exit from the European Union, the Bulgarian president said that the most important thing about Brexit is to preserve a united European position for problem-solving, although different countries have different sensitivities.

For his part, Rebelo de Sousa said that Portugal is fully committed to maintaining the agreement reached between Britain and the EU and it is impossible to restart Brexit negotiations.

The EU has already adopted a unified position and this position must be defended and adhered to, he emphasized.

Radev began a two-day state visit to Portugal on Wednesday, during which he will also hold talks with Prime Minister Antonio Costa and Parliament President Eduardo Ferro Rodrigues.