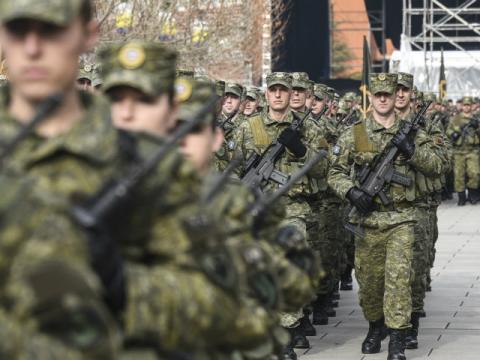 Of the total, 54.5 million euros is earmarked for the KSF, which did not respond to queries from BIRN about its military investment plans.

"Some 21.9 million euros are foreseen for the KSF on capital investments," the Defence Ministry's Ibrahim Shala clarified to BIRN.

The difference between KSF "capital investments" this year and 2018 would amount to about 3 million euros, according to Shala. He said the ministry received "over 17 million" for investments in 2018.

The government plans to invest gradually over several years in transforming the KSF into an army.

"In order not to overstretch the state budget during the process of transformation, the plan is to increase the budget for KSF by 5 million euros every year," Shala said.

Kosovo's parliament in December adopted three draft laws on the KSF, expanding its competences and creating a legal base for its transformation into a regular army.

By adopting laws that merely changed the current KSF's powers, parliament bypassed the need to adopt the constitutional changes needed to establish a regular army - which Serbia opposes. (Belgrade rejects its former province's independence, and remains wholly against it having a regular army.)

A constitutional obligation for...